First of all: I am German. I think in German and normally I write in German. So this is the first time, I write down my impressions in English, and I hope my small range of vocabulary will be sufficient to describe my first Meet Magento in the Netherlands.

Second of all: I only know the German Meet Magento. So I was very interested to see, what the Dutch will do.

Third of all: I really like the dutch language. It has so much „chr „, long „aaa“ and „iiitjes“. I don’t understand very much, but I like to tisten.

But now I will start to write down my impressions of the #mm14nl. (All the pictures I have taken are blurred. I decided to make the dutch beer at the pre/after/borrel/party (has it been Dutch or Belgian beer?) responsible for that). 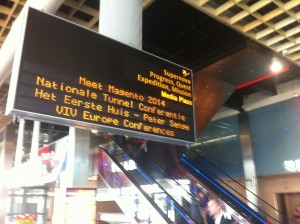 In contrast to the german Meet Magento the dutch one took place in a kind of exhibition hall, called Media Plaza. The Meet Magento Germany takes place in a Hotel. That’s just a matter of taste. The Media Plaza in Utrecht was very clean and stylish and mostly I heard people say something like „this location is cool“. For me, rooms that are too clean, too colourless and too windowless are making me tired and brainless (after a while, not directly). Studies have shown that the heart rate is smaller if someone can take a look out of a window. So on this event, all attendees seemed to have an increased pulse. 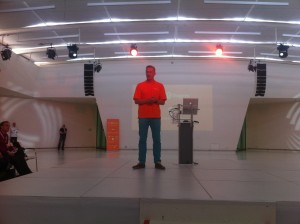 For those, who would have a break (mostly smokers) there was a kind of prison yard outside. There I found out, that the sun was shining this day… 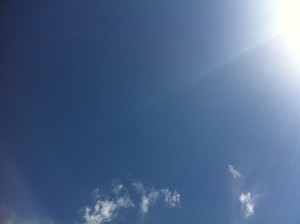 In contrast to all the other countries worldwide, the Netherlands will find their national country color represented in the Magento Color: Orange („Oranje“, dutch people say…). I am wondering, if the Netherlands are feeling closer to Magento because of that…

I was there on day two. The first day was reserved for people who never worked with Magento before, the second day was for people like me. But all of them were free to attend the after show party (or pre party for all the people on day two) which was named „Borrel“. I translate it – thats the word for „Drink“. But at the evening, everyone was free to eat something (I didn’t). 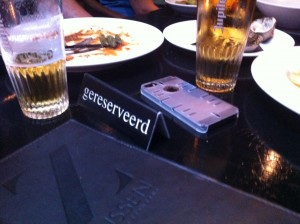 I have to interrupt myself for some irrelevant informations.

First of all: I like Utrecht very much. It is a charming town with myriads of bicycles (I’m sure everyone of the foreign guests has taken a picture of them), good weather, fantastic coockie icecream and an age average of 25 I guess. Both event venues – Leipzig #mm14de and Utrecht @#mm14nl are beautiful cities.

Second of all: I like the Meet Magento App very much. But I am sure, there was a hidden Competition (or better a hide-and-seek-game) to find out how to switch the event country on iPhones. I didn’t succeed without asking someone (more than one). So I’m not the winner of this game. Hm.

Third of all: One fundamental laws of nature is: the larger the event, the shorter the breaks, the longer are the queues of female people waiting in front of the toilette. Except here. This is a key reason for participating (Meet) Magento Events. 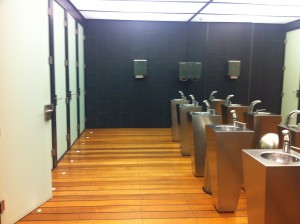 Back to the event. Now I use bullet points to to speed up the post:

The Keynote: thanks to Bas Nawijn to talk in english! He provides a good insight of how Magento (and the group of certified developers) is growing in the Netherlands and also how eCommerce is growing in the different plattforms. Did i mentoined, that I like the dutch language? „Groei e-commerce over de verschillende platformen.“

The sessions: There were up to 5 sessions in parallel, many of them in english. That was great!

Unfortunately, the sessions were not recorded, so it is not possible to view them later (again or for the first time, beause there were so much parallel…).

This note is for Damian: The glasses were too small and water was hard to find, this resulted in a significant risk of dehydration…

This note is for everyone in Germany: all guests had at their disposal a (good! and free!) wi-fi connection…

I was very impressed of the Twitter-activitiy of the Dutch Meet Magento Team (@mm14nl). Every few minutes a new tweet was send with informations and pictures round about the event. Everyone was asked to send up tweets under the hashtag #mm14nl – and all tweets were prompted on a „tweet-wall“. That was very nice!

Only one sentence about the food: the dutch bread is so much soft, you cannot break it, you can only tear it. This is not naturally, but tasty. 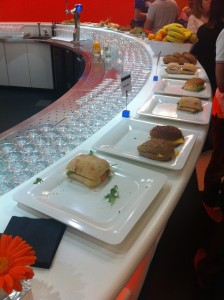 In summary: it has been a great day and it was really fun to be there and I’m sure, next year I will come again.

@riconeitzel: Maybe you read this: I’m sure, I found out, why there are always these mini-croissants at every event. It has no sense! But if someone find out, that it makes no sense, he will be transformed into a mini-croissant presented at the next event… So everyone, who reads this, will beome a mini-croissant. And maybe we all will meet again at the next Meet Magento on a silver platter…